I am what is euphemistically referred to as the 'curvacious type'.  For those of you who don't speak bullshit, this means I have hips and thighs.  Real ones.  Jewish ones.  For many, many years this area of my body caused me great anxiety.  You need to understand that I came of age in an era when 'the waif' was all the rage.  In 1992 every teenage girl in the Western world wanted to look like Kate Moss and didn't care how little they needed to eat to achieve this look. 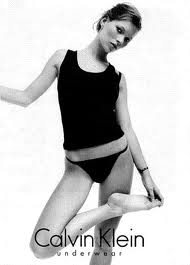 For years I despised what a friend so kindly referred to as my 'childbearing hips'.  Thanks to the cult of Kate I also came to resent my boobs.  Why couldn't I be flat-chested like all those other lucky girls out there?  I chose clothes based on their ability to hang loosely, unaware of the fact that this sort of strategy often makes you look bigger.  I refused to wear tops that did not at least reach past my hips.  I hid under loose sacks, terrified of people getting a glimpse of all those attributes I now recognise make me who I am.  Like many other women, I was ashamed of being me.

And then I had an epiphany of sorts.  I came face-to-face with a woman so sexy, so stylish and so hippy, she took my breath away.  I met Joan Holloway of  Mad Men. 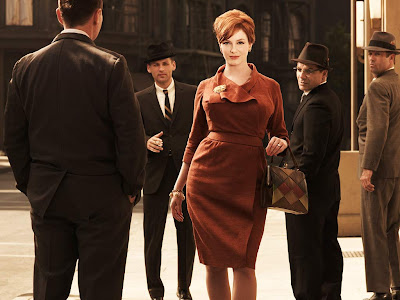 Here was a woman who embraced her curves and was loved for it - by men, by women, by fashion designers.  I was and still am smitten.  Joan sashayed her hips as she walked through the offices of Sterling Cooper and you loved her for it.  There was no shame, no attempting to hide the woman she was, or starve into a skeletal version of herself.  I began to change how I dressed.  I bought tailored, well-fitting shirts and pencil skirts.  I recognised that the most important part of a woman's outfit is a well-fitted bra.  I began to realise that stylish isn't the same as fashionable.

So I was thrilled to see the following image on Vogue Australia's facebook page yesterday of women voted this week's 'Best Dressed'.

﻿﻿ ﻿﻿
All of these women have curves.  Luscious, womanly, gorgeous curves.  They have boobs and they have hips and they are dressed to accentuate those features.

Maybe this is just another trend.  Maybe tomorrow the waif will be back.  But I hope not.  And if it is, there is at least one Cheeky Fashionista who has learnt that loving who you are and paying tribute to the assets you possess is the most stylish thing you can do.

Posted by Cheeky Fashionista at 17:33

Cheeky Fashionista
Melbourne, Australia
rachel is a mother, teacher, writer, fashion nerd. she loves the challenge of being a full time working mum endeavouring to look good on a budget. she succeeds - most of the time...